So I went to a "comic convention" in Green Bay last weekend. That's what it was called. Actually what it was was a very depressing look at the state of local comic collectors and collecting.

Situated in a typical hotel conference room, there were about eight or nine dealers, each trying to unload about 20-40 long boxes of stuff. Each dealer also had a backrack of "collectible" comics (Silver age, Byrne X-Men, variant covers, etc). Each dealer was basically the same as the others, with old stained boxes, tons (literally?) of unwanted crap they haul from show to show, every weekend.

I can only assume this is standard transport procedure

I spoke to each dealer over the course of an hour, peeked in few boxes, and left. In tears. Well, not outwardly, but I was very sad on the inside, I can tell you. For the entire time I was there, there were about 20 non-dealer people (all guys, natch) clawing through boxes, looking for that missing copy of X-Factor (been there, man). The was an old guy they called the Professor, tall but hunched over by age (probably from hauling long boxes), in a long black coat, pulling out the most random collection of stuff: Richie Rich, Spawn, old tattered Gold Keys, JLA from the early 2000's - all from the same two or three boxes. 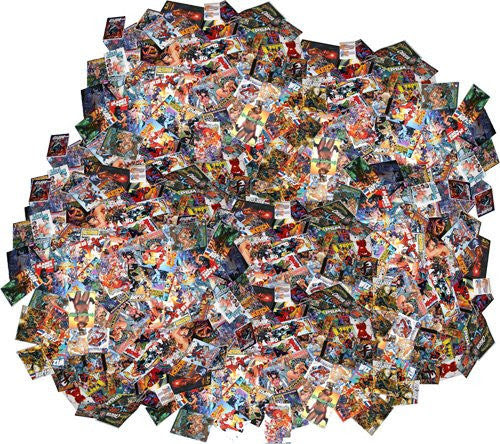 There was another guy here with Wolverine hair, and I don't think he was cosplaying. I saw a denim jacket completely covered in comic book logos - dude was in his mid-30's. And the usual collection of stinky man-children. Of course, not one kid or anyone under the age of thirty. Or a female, except for the very bored wives of the dealers.

I am not overtly criticizing anyone's hygiene or fashion sense, but it was the same circle jerk I've seen for the past 30 years. The same insular, myopic clowns you see everywhere in comic shops and at (real) conventions. I like comic book people. I'm one of them. But I'm tired of the stereotype reasserting itself every chance it gets. Maybe I'm just grumpy.

More importantly (and more in line with the jist of this post), most of the cash exchanged was between the dealers. They were buying each others overstock in order to get ready for the next show.

So why the metaphysical tears? There is no market for comics like this (at least not in Green Bay on a Saturday in March). And the comics I own and love are unloved by 99.9% of the North American population. As I spoke to each dealer about my well curated, properly stored, super fancy comic book collection, I received grunts and near-ridicule about my aspirations to sell my stuff. "It's not really worth anything" was the standard reply. But that's what they are selling. So they're effectively telling me their stuff isn't worth anything either. Yet here we are. At a comic book convention in Green Bay in March.

Posted by Mike Thompson at 9:43 AM