The fall and fall of the Guardian Project

I love hockey (specifically, the Toronto Maple Leafs).
I love comics (grew up a Marvel Zombie).

So, in October 2010, when the National Hockey League and Marvel Comics' icon Stan Lee announced a joint venture called the Guardian Project, I was as excited as a mature, well-balanced, professional 40-something could be. Well, maybe not "excited". Let's say, "intrigued".

Could this "Guardian Project" be my own personal Reese's Peanut Butter Cup of pop culture? 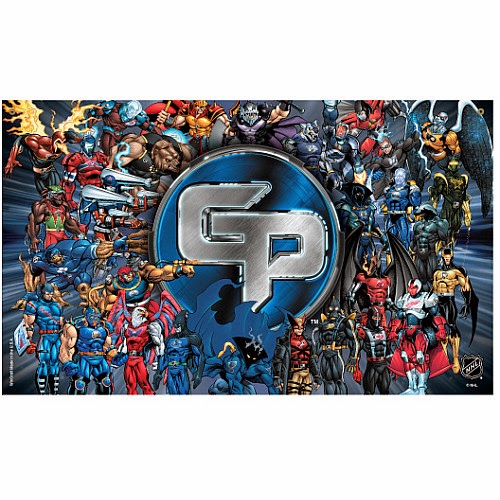 As the NHL rolled out character after character during the 2010-2011 season leading up to the All-Star game, I thought, "well, there's a few interesting character designs here, but what's the point of all this?" Obviously, it was an effort to attract 9-14 year old kids, that perhaps had not the awareness or appreciation for the greatest sport in the world like I did. The best coverage of the whole thing came from Greg Wyshynski of Puck Daddy fame:

The NHL Guardian Project origin story:
Behind the scenes of hockey's most controversial new marketing effort

Long story short, the whole thing was a debacle for everyone involved. The NHL gained absolutely nothing except for ridicule, the company that developed the graphic elements, Oxford Metrics Group, took a massive financial hit, and the fans had to endure this:

As late as the summer of 2011, news of the Project still dribbled out but the last news one can find on Google (except for writers using the Project failure as a snarky aside) is from October 2012 in which a Taiwanese businessman announces a partnership with Stan Lee involving the Guardian Project. It's now dead, I assume, hopefully, along with this fellow (and his friends):

The Facebook page and some NHL links still live on, if you feel like looking at the remains.

The Guardian Project: RIP? Hope so.
Posted by Mike Thompson at 4:01 PM